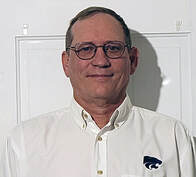 I enlisted in the Navy in June of 1978.  I was Stationed on the USS Cincinnati until I was discharged in June of 1981.  I spent 20 years on active duty and in the reserves.

I graduated from Kansas State University in 1985 with a BS in Agricultural Economics.  While in college I worked two summers as a summer trainee for the Soil Conservation Service.

I became a Technical Service Provider in February of 2022.  I am certified in the following: CNMP DIA – 101, Comprehensive Nutrient Management Plan – 102, Nutrient Management Design and Implementation Activity – 157, Conservation Crop Rotation – 328, Residue and Tillage Management, No-Till, Critical Area Planting – 342, Residue and Tillage Management, Reduced Till – 345, Nutrient Management – 590.  I am currently working on becoming certified in the following: Soil Health Management Plan – 116, Conservation Plan – 199, Pest Management Conservation System Design – 161 and Soil Health Management System Design - 162.
​
My wife Terri and I will celebrate our 32nd anniversary in January of 2023.  We have three children. Travis and his wife Denna.  They live in Aztec New Mexico.  They have three children. Garrett, Ryan, and Tyler.  Ryan is playing baseball at Eastern Arizona Community College. Tyler is a freshman at Aztec High School in Aztec New Mexico.  Our oldest daughter Macey and her husband Larry live in Nashville Tennessee.  Macey is the comptroller for the State of Tennessee.  Our youngest daughter Tiana is engaged to Landon Cook.  They will be getting married in October of 2023.  Tiana has a 10-year-old daughter.  Tailynn keeps us on the go.  I enjoy going to Kansas State University football games.  I have been a season ticket holder since 1997.